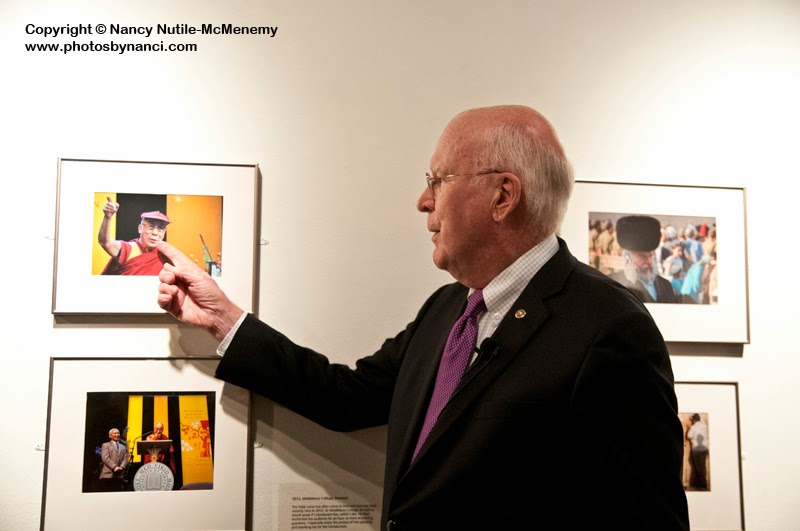 Patrick Leahy, Vermont's Senior Senator, former President Pro Tempore of the U.S. Senate, third in line for the U.S. Presidency (until the Republicans take over on Jan 7), Dean of the Senate, and photographer was in Brattleboro at the Brattleboro Museum & Art Center (BMAC) Tuesday evening for an exhibit of photos he has taken during his 40 years in the Senate that he’s calling "World Leaders and Global Citizens". Leahy often has had access to such people beyond that afforded to most press photographers. Organized by BMAC to mark the 40th anniversary of Leahy’s first election to the U.S. Senate, this exhibit appeared at Georgetown University Law Center, his alma mater, in August. The exhibit moved its current southern Vermont location and opened at BMAC on Nov. 1, and remains on view through Mar. 7, 2015.

Over one hundred people from around Vermont gathered in the brick museum in downtown Brattleboro to look at samples of Leahy's creative side and to listen to the Senator describe the events that surrounded these moments that he captured. 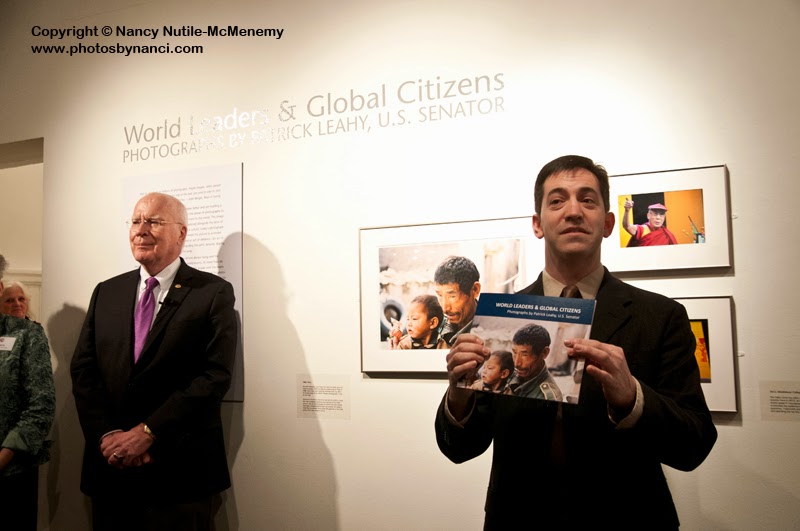 The exhibit was "officially" opened by Museum Director Danny Lichtenfeld, whose mother and grandmother were on hand for the opening, "up from the Berkshires" his mom stated. They particularly liked the images of the Vice President Joe Biden taken during a 2010 health care meeting with President Obama. Lichtenfeld proudly displayed the Exhibit Catalog made possible by former Leahy staffers Ellen McCulloch-Lovell and Peter Van Oot and told the audience that every public library in Vermont will receive a copy. 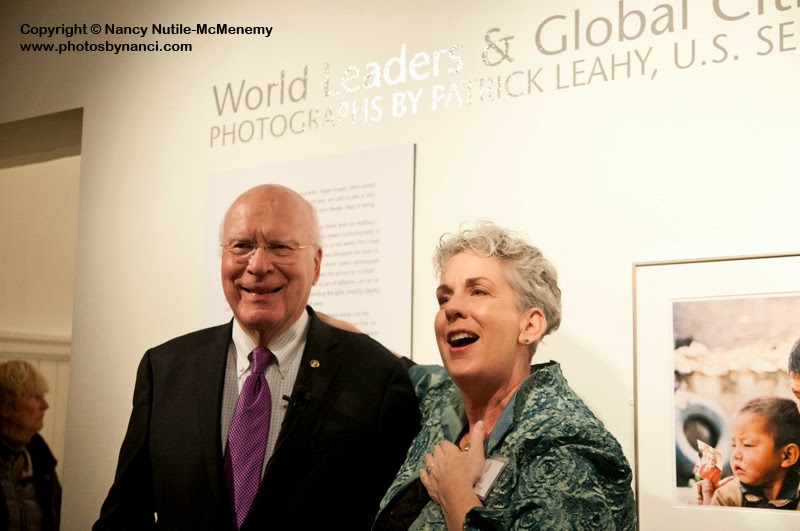 Mara Williams, Chief Curator of BMAC, welcomed everyone and said she has been admiring the Senator's photographs for years and wanted to honor his 40th anniversary of being elected to the Senate using his most unique views of "world leaders" and the "global citizens."

Leahy began taking pictures at the age of six or seven, after his parents gave him a Hopalong Cassidy box camera. Leahy says he still has a lot of his old cameras but he told me he mostly shoots with his Nikon D300s and his favorite 18-200 mm lens.


Leahy began his 40 year retrospective at a group of photos taken in Tibet. After many years of negotiations, a Senate delegation traveled to Tibet in 1988. Leahy said "I was joined by my dear friend and mentor Senator Bob Stafford." Leahy pointed to a photo, taken in Lhasa, of a Tibetan father and son holding a forbidden picture of the Dalai Lama. During these times, possessing a photo of the Dali Lama could result in being arrested. Leahy took the photo reluctantly. When asked why the man would risk prison by showing a photo of the Dali Lama and having a westerner photograph him, the man said "they have to know." At the time Leahy was shooting film so he had no idea if he got the shot or not. But upon returning to the States he developed and printed the image. A few weeks later his Holiness was in the Senator's office and Leahy gave him the photo and told his Holiness the story behind the photo. Leahy said he was overwhelmed by the emotion on the Dali Lama's face.


Leahy is also proud of his images taken at the Dali Lama's visit to Middlebury College in 2012. Pointing to one of the photos Leahy said "This is just so different, you see him here with a microphone and a sun visor, and here pointing to Marcelle and me following my introduction of him." Leahy recalled the Dali Lama saying "our true friends are those who never left us like Patrick and Marcelle Leahy." 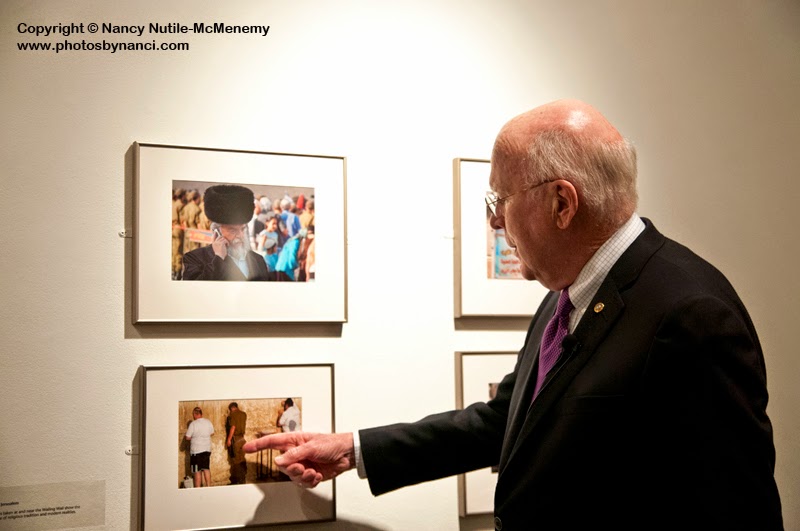 Giving credit to his wife, Marcelle, Leahy said "Marcelle is really the one with the eye, she spots them." He points to a print taken in 2007 in Jerusalem near the Wailing Wall. There is a man dressed in traditional clothing talking on cell phone. And one photograph Leahy likes for it's contrasts, men praying at the Wailing Wall: one dressed traditionally, one holding an automatic assault rifle and a tourist in shorts. "But all doing exactly the same thing, I just couldn't resist it."


Sometimes traveling to war zones, Leahy finds interesting shots like one he took as the Iraq war was winding down. One photo shows a Saddam Hussein's crossed sword sign with an English translation next to it: This is a secure facility, deadly forces authorized.

"I took that to word" he said, "I used a telephoto lens." Leahy also spoke about a few images he has of assault weapons. "This is also what I'd see practically all the time flying out of the helicopter, the automatic weaponry, it's kind of a chilling thing. You never forget you're in a war zone."

In 1985, President Reagan's second inauguration was moved inside because of the weather so most of the press corps was left outside. The ceremony took place in the Rotunda and, of course, Leahy had his camera. In the second row, on tip toe, Leahy snapped away. A news magazine asked for his film and ran a front page picture of Chief Justice Warren Burger swearing in Reagan. "President and Mrs. Reagan loved it the best of all their inaugural pictures" Leahy told the audience.

One of the privileges afforded to Leahy is to have been in Washington during six different presidential runs. Leahy joked with the audience about traveling back and forth to Vermont from D.C. on regional jets, a better way to travel is on Air Force One. He has a few images from a trip with President Obama to Michigan in 2014 for the signing of the 2014 Farm Bill. The photos show a spacious, quite elegant cabin. He also has a couple of Secretary of State Madeleine Albright en route to Bosnia in 1996. This time Air Force One is a cargo plane. Leahy's picture of Secretary Albright and General John Shalikashvili sleeping was published by Time magazine. In a second photo not shown to Time magazine, President Clinton is seen in the background, thus designating the cargo plane Air Force One. "The reason we took a cargo plane in, the big blue and white one coming into a war zone is pretty obvious, cargo planes were coming in every five minutes and we could come with the President aboard." 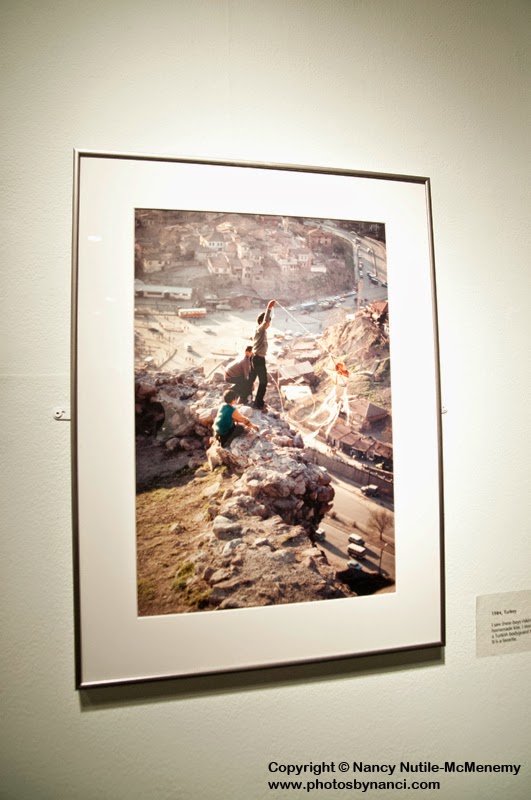 One of Leahy's favorite photos is of two Turkish boys flying a homemade kite, taken in 1984. The boys were risking their lives standing on top of a pile of unstable rubble to the fly the kite, "I had to get that picture. So I'm standing on a similar precipice. I could feel the ground shifting under me, I've got a Turkish bodyguard holding me by the seat of my pants with one hand balancing himself with his machine gun, I turn around and the second body guard is hold the barrel of the machine gun, I thought OK, I got the picture I'm leaving." 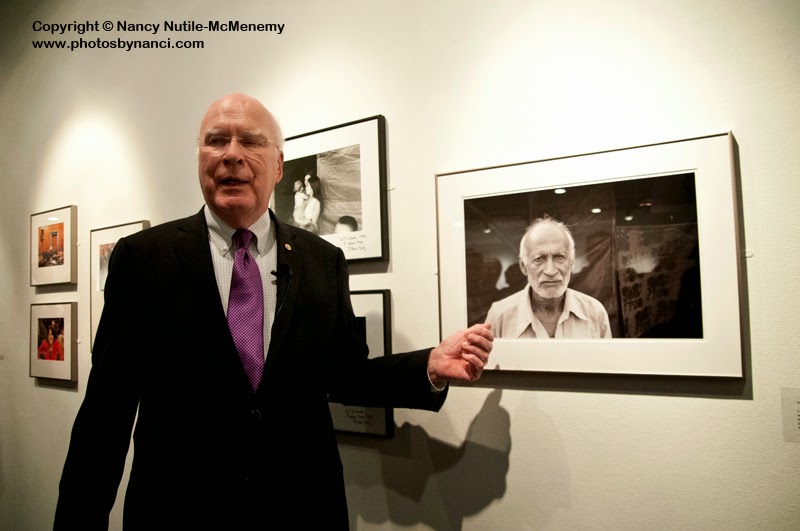 His "conscience photo" is one he is most proud of. Leahy chairs a committee that funds United States help for refugees. As a visitor to these camps he is haunted by the faces of people he's met in these camps. He traveled to El Salvador in 1982 and took many pictures on black and white film. "This one stuck with me. I hang this one over my desk. So I sit there and every day I'm looking at this picture...I call it my conscience picture." Leahy relayed what the man said to him that day, the man looked Leahy straight in the eye and said "I'm not rich, I'm not powerful, I have no political influence, I can't vote for you, I can never do anything to help you, what can you do for people like me?" Leahy relayed this story to a good friend who lives in Ireland, Bono (Of the band U2) now has a copy of the photo in his house in Ireland. Leahy says every morning I walk into my office and he's looking me in the eye and he reminds me "don't get to carried away with yourself, you might meet with Presidents and Kings and all that but we are the people that need your help."

Leahy spoke about his many visits to Cuba. On one early trip he visited with Fidel Castro and attended a baseball game. Castro told Leahy he had to try Cuban ice cream, Leahy respectfully told Castro-Vermont has Ben and Jerry's and nothing is better. Leahy vowed to get some to Castro. The embargo prevents trade with Cuba but Leahy was determined. When the Cuban baseball team came to play the Baltimore Orioles, Leahy sent them home with coolers filled with Vermont's finest ice cream packed in dry ice. 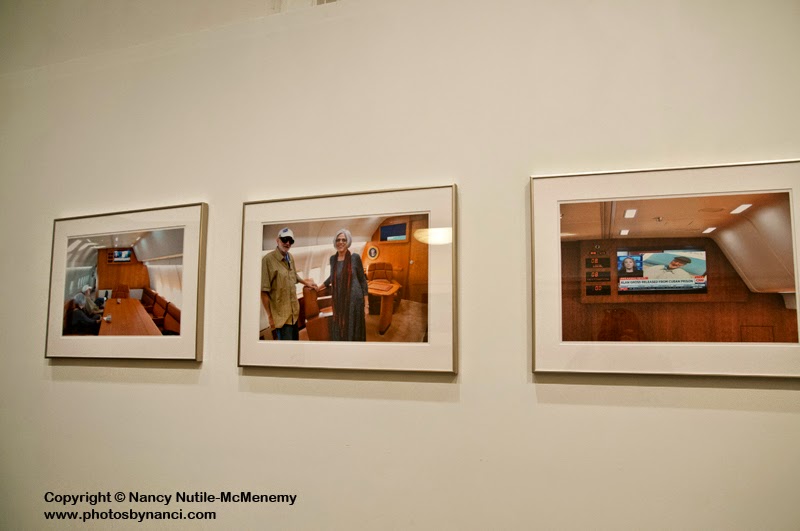 Two weeks ago Leahy's images were again center stage as he travelled to Cuba for the release of Alan Gross. After years of quiet, well guarded negotiations, Leahy got the call early in the morning of December 17 and boarded a plane heading to Cuba. His images were seen all over the world. As relations build between the U.S. and Cuba, both Patrick and Marcelle have a special "bucket list" item they hope to check off. Marcelle told me she and the Senator would love to take a scuba dive trip to Cuba. Both are avid scuba divers who dive around the Caribbean but like most U.S. divers have been unable to dive on the reefs off the coast of Cuba.

Politico once reported that Leahy’s office is not filled with images of celebrities but with his own photos, so that he will remember the human face of national and world affairs. Leahy says he has about 25,000-30,000 images in his collection, some include private meetings with presidents and heads of state. He'd like to go back and look through them again and revisit some of his black and white images. But the ones that still haunt him are the ones of ordinary people just making their way in the world.

More images from the exhibit: http://photosbynanci.smugmug.com/Vermont-Politics/Senator-Patrick-Leahy/World-Leaders-Global-Citizens/