Please VOTE for my Image!

- July 21, 2012
The image I captured of the Bowers Covered Bridge being placed on the new concrete abutments is in a Vermont Photo Contest 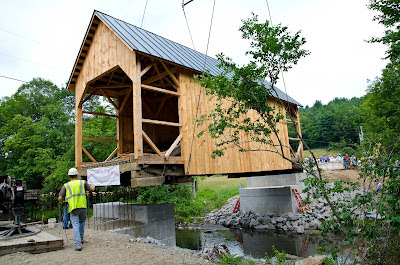 I could use your vote and your friends and family votes too, so spread the word!
THANKS


Gov. Peter Shumlin launched ‘Build Up Vermont’  Thursday to encourage residents and visitors to share their views of the state – using their cameras. The emphasis of this initiative is to showcase photography of communities and destinations within Vermont in the aftermath of Tropical Storm Irene, celebrating the recovery efforts since the Aug. 28 storm. The centerpiece of Build Up Vermont is a website that will allow people to post their pictures, view the growing photo gallery and vote for their favorite shot.
“What better way to reflect the hard work and remarkable spirit of Vermonters than by promoting images of the progress we’ve made in the last 11 months,” the Governor said. Build Up Vermont is a collaborative between the Governor’s Irene Recovery Office and the Vermont Department of Tourism and Marketing.
Photos are submitted to www.BuildUpVT.com, and viewers can vote on their favorites as part of a photo contest to win tickets to see Vermont musician Grace Potter perform at the Grand Point North Festival at Burlington’s Waterfront Park in September (visitwww.grandpointnorth.com for more information).
“It is vital for Vermont to share images and honest, real-time perspectives of our active and accessible communities as we approach the one year anniversary of Tropical Storm Irene,” Tourism and Marketing Deputy Commissioner Steve Cook said. “Tourism is critical to Vermont’s economy and BuildUpVT.com will show potential Vermont vacationers that we are vibrant, we are beautiful and we are open for business.”
To submit a photo, view the gallery or get more information, visitwww.BuildUpVT.com.