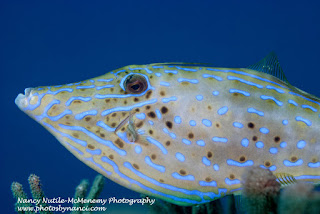 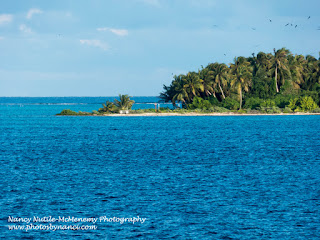 We made our way up to Lighthouse Reef and moored overnight off Long Cay. I had a lovely breakfast of French toast and bacon with maple syrup (don’t think it was Vermont but…) Our first dive was off Half Moon Caye at Tarpon Cave, They aren’t actual caves but cuts in the reef where the tarpon hang out. We saw lots of them but what was most impressive about this dive was the number of reef sharks we encountered. Seemed like they were everywhere. We also caught a glimpse of a green turtle off on the other side of the reef. 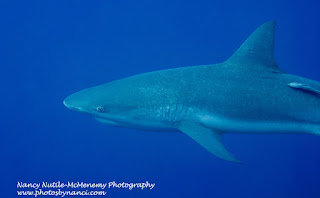 Second breakfast was a coffee and a piece of banana bread then back into the water for dive two at Tarpon Caves. More sharks were seen but this time we picked up a very friendly grouper that followed us around alike a puppy dog; I named him Riley II. Check out my images of Riley II with Jay in my gallery: https://photosbynanci.smugmug.com/Underwater/Belize/December-2015/Underwater/Dec-8-Tues/

Saw my first scrawled filefish ( see picture above) of the trip and an ocean triggerfish being cleaned. Near the end of the dive, we saw a southern stingray in the sand. 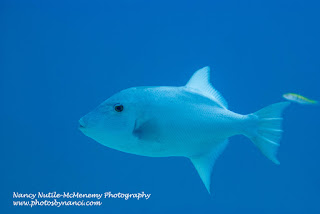 Tarpon Caves was an excellent dive site. I really enjoyed the coral and the big “stuff.” The visibility over the wall was great but under the boat (above the sandy area) was pretty bad.

Today for lunch we had Mexican Buffet-chinmole soup and make your own burritos. Very yummy.

The afternoon dives were at a site called East Cut. With a hardpan wall and coral heads in a sandy area. When we jumped off the boat I thought-we’re never gonna find the boat after the dive it was that murky. But we had a nice dive with a couple of shark sightings, a hawksbill turtle, and eleven lionfish. We also saw three smooth trunkfish chasing and displaying. One finally gave up and swam away.


We chose not to do the second afternoon dive but watched the sunset. It was gorgeous but no green flash-too many clouds on the horizon. 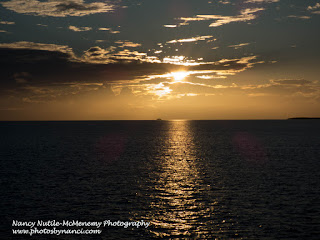 We weren’t going on the night dive and had planned to star gaze, come to find out no one could night dive as there were seas wasps in the water again. So most folks hung out on the top sun deck and watched for shooting stars.