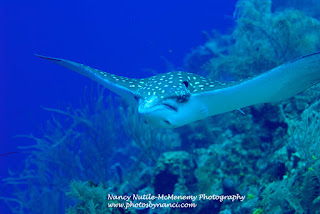 Divers Log
Friday December 4 and Saturday December 5
Well, the plan was to get to bed early and wake up at 11:30 p.m. Followed by a drive to Boston in the wee hours of the morning. After tossing and turning, we gave up and hit the road. As you can imagine the traffic on the interstates between 1-2 a.m. is pretty light. No problems parking or getting to the airport for our 5 a.m. flight to Miami.

Flight to Miami passed fairly quickly. We grabbed breakfast at “Clover’s” and Irish Pub in Terminal D. They even had blood pudding, which I totally got hooked on when we traveled to Ireland last winter. Washed that down with an Irish coffee, Jay had a Guinness all before 10 a.m. 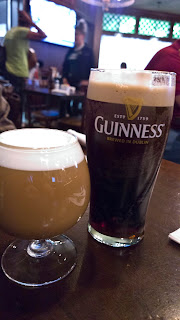 The flight to Belize City was pretty empty so we got to spread out a bit. Jay caught a few more winks and I read books using the Kindle app on my tablet.

We adjusted our watches, filled out the Customs and Immigration forms and prepared for our Belize adventure.

We’ve traveled to Belize before, seven times, I think (1998, 2000, 2002, 2003, 2005, 2006, and 2008). The first trip, we traveled around the country visiting the various districts and lots of Mayan Ruins. I fell in love with this little country in Central America. We did one trip to Ambergris Caye to dive but found a wonderful dive resort, Lighthouse Reef Resort based in Northern Caye and traveled there about four times before it closed. We tried Turneffe and Glover’s Reef but we really missed diving on Half Moon Caye.

Jay had been checking out Belize diving and zeroed in on the Aggressor Fleet. They were having a great sale so he jumped on it. So here we are on a plane winging our way to Belize City.

Landing, we are greeted at the airport by a representative from the Aggressor fleet. Here hang around the airport waiting for one last couple to arrive. We are loaded on a bus and head toward the Radisson Fort George. We’re early so we stop for a couple of beers and a watermelon margarita. 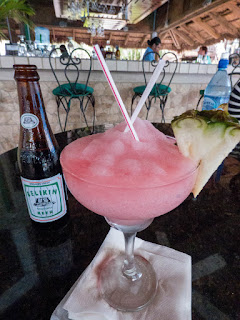 Around 3 we are welcomed aboard the Sundancer II and shown to our stateroom. Number 3 for us and it’s great; a queen bed and a HUGE window port side of the yacht. The crew introduces themselves and we have a champagne toast to a week of great diving. Dinner is grilled black chicken and bread pudding for dessert. 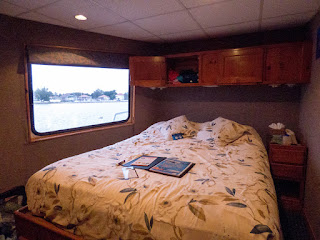 Sunday December 6
Sunday comes way too early after a rather loud trip to Turneffe Atoll from Belize City. We wake to pouring rain and dark skies. But we’re divers, we’re gonna get wet anyway. After a hearty breakfast of eggs, sausage and a johnny cake, we’re in the water following our dive briefing.

Our first dive site is Black Beauty. The air temp is about 81 F and the water about 83 F. The dive masters ­­are Conway, William (Buddy or Boo-Boo), Johnny and Captain Eddie. This first dive is a checkout dive to make sure our equipment is working properly and that we are weighted properly. We get started a little late today (9 a.m.) we should have been the water at 8 a.m. No worries. In the water we see free swimming morays, queen and gray angelfish and the dive highlight-a spotted toadfish-fantastic. 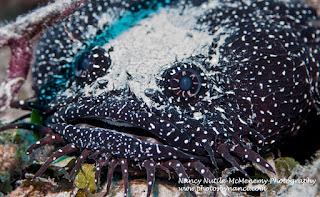 Again on Black Beauty, we’re in the water at 11:30 and see another free swimming moray, a few channel cleaning crabs and Ed spotted a clown crab. Back on board we have fish soup and make your own sandwiches before moving to Front Porch for the afternoon dives. We skipped the 2 p.m. dive but went on the 4:30 p.m. one. It was very overcast and by the time we finished the dive we couldn't really read our gauges, it was a little dark.

Front Porch is a site in front of Turneffe Lodge. I looked back in my dive log and had noted that when we were at Turneffe Flats in April 2006, it was an unimpressive dive. It still was. We opted not to make the night dive on this site. Dinner was cauliflower soup, salad, snapper in a delicious sauce with potatoes and veggies followed by a wonderful cheesecake with blueberry sauce. Yummy.

Monday we'll be at Grand Bouge and Johnny's Wrench.