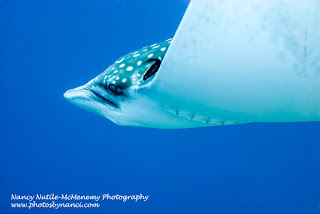 The boat moved up the Turneffe Atoll to Grand Bouge. Right off the boat I spotted two juvenile spotted drums swimming together. I would end up seeing five over the dive-pretty cool. 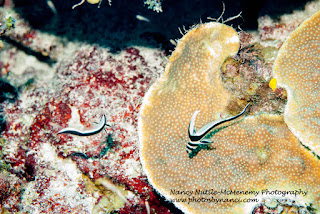 I also saw eleven lionfish. We observed some weird fish behavior on this dive too-we saw a yellow colored remora under a parrot fish and under a honeycombed cowfish. I also got up close and personal with a few yellow headed jaw fish. 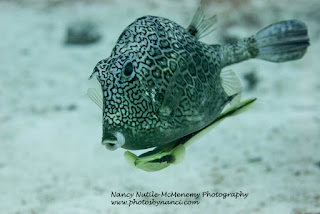 We enjoyed apple cake for our mid-morning snack then back in the water for our second morning dive. This dive on Grand Bourge may be the highlight of the week. Jay, Allan and I saw six spotted eagle rays swimming together. I got a few stills and video of some of them, it was really very cool seeing them slowly swimming together and hanging out with us for about five minutes.
We also saw another free swimming moray, an adult spotted drum and a queen triggerfish.

Lunch was a wonderful curried shrimp over white rice.

The boat moved again to Johnny’s Wrench, named for one of our dive masters. We saw the trifecta of angelfish-Queen, French and Gray. I tried to get a shot of an orange-spotted filefish but he was not at all cooperative. At the end of the dive we thought it was getting a little murky (reduced visibility) so we decided to skip the 4:30 and 7:30 night dives. 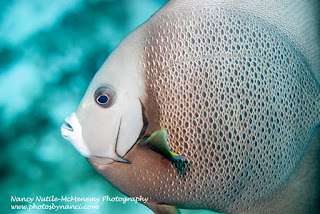 Dinner was a BBQ buffet: BBQ chicken and pork ribs, fried rice, a wonderful mac and cheese, corn on the cob and salad. Dessert was an ice cream sundae.

The night dive got canceled because the surface water was loaded with sea wasps (a type of jellyfish like creature) that can give nasty stings. This allowed the crew to pack up and move to our next dive site.

Next up Tarpon cave and East Cut!