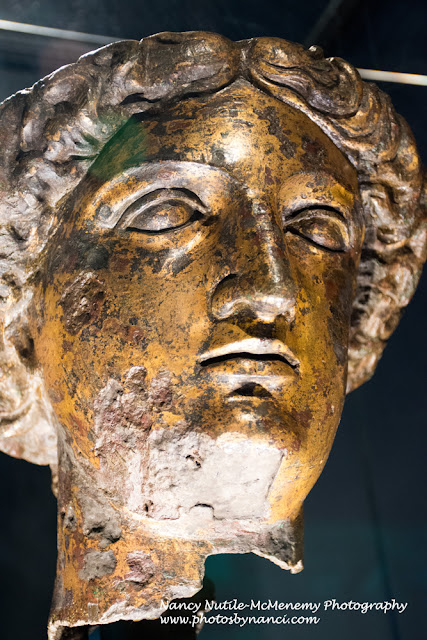 It's Wednesday, October 18, 2017 and we're in Bath England. We peek outside out hotel window and see that it's drizzling. Today we are touring Bath and visiting The Roman Baths and Bath Abbey.

The Apex Hotel (which has only been open for two months!) offers a breakfast buffet or orders from the kitchen. I opt for the Eggs Royal (Eggs Benedict with smoked salmon) and let me tell you it's good!

Our coach and walking tour are scheduled from 9-11 a.m. and we'll end up at the Baths to explore on our own.

Our city guide is Mike, Mike of the Stripes as I call him. We drive around and he points out interesting and historic sights around Bath. 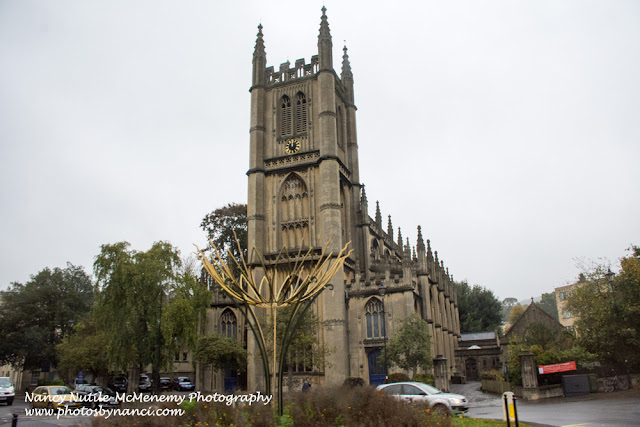 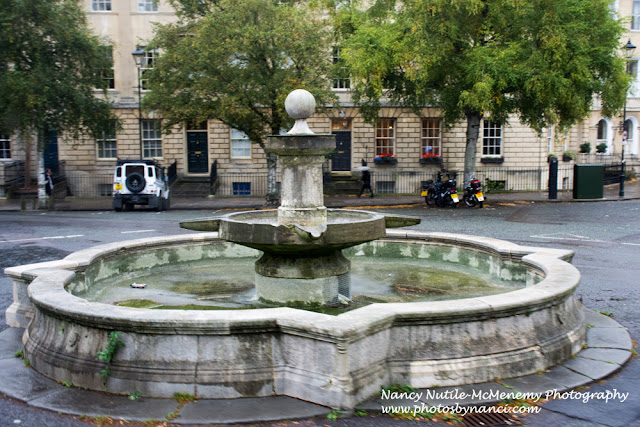 We hop off the coach and begin our walking tour at the house where Jane Austen spent some time. 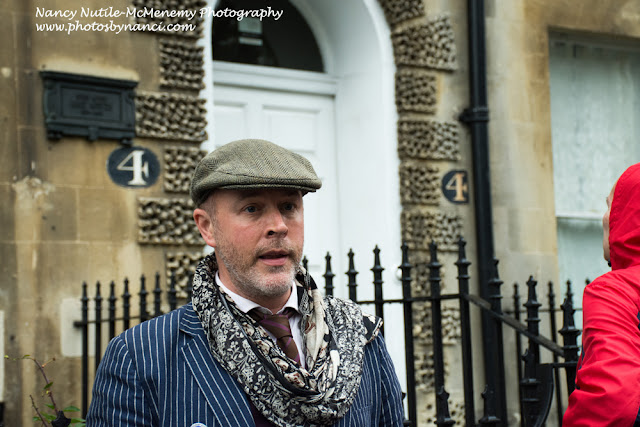 You can plan tours and visits specifically with Jane Austen in mind, Jane Austen's Bath. We didn't really have time (and I'm not sure the guys on tour with us would appreciate it...) 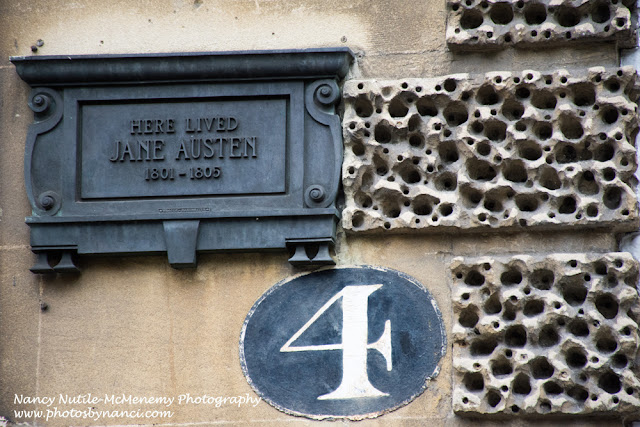 We cross the street and visit Sydney Gardens and Holbourne Museum where Jane spent many days and evenings during her time in Bath. 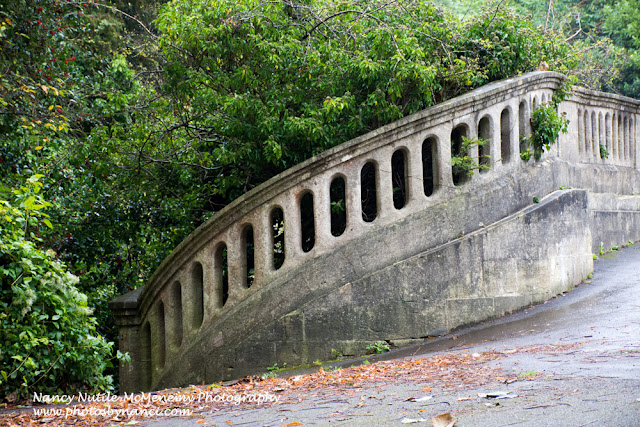 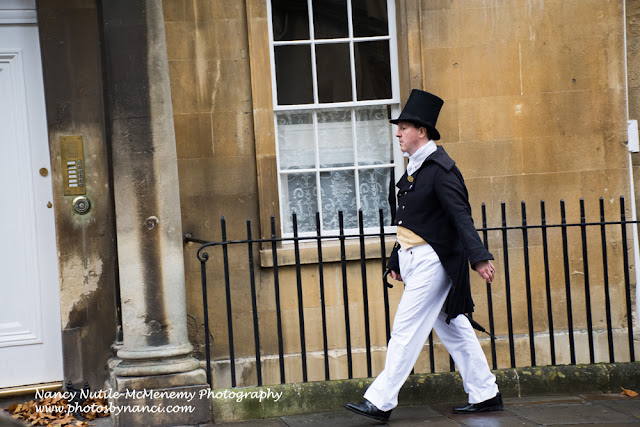 Mike explains that Jane was less than impressed with Bath:

“Another stupid party last night; perhaps if larger they might be less intolerable, but here there were only just enough to make one card table, with six people to look over, & talk nonsense to each other.”

You can read more quotes by Jane about Bath: HERE

Continuing our city walking tour we visit the Royal Cresent 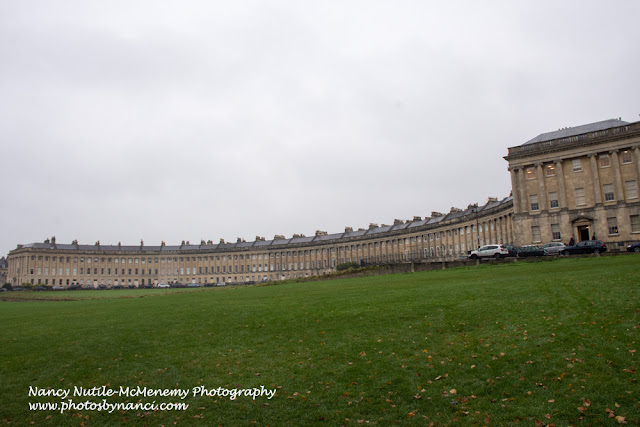 Built between 1767 and 1775 and designed by John Wood the Younger, it is a great example of Georgian architecture.

2017 marked the 250th Anniversary of The Royal Crescent, with the May 19, 2017 marking exactly 250 years since the first stone was laid at No.1. Today, it is home to the five-star luxury hotel The Royal Crescent, a museum of Georgian life at No. 1, plus private housing.

This world famous landmark is arranged around a perfect lawn overlooking Royal Victoria Park and has an impressive ha-ha (a recessed landscape designed to recreate a barrier whilst preserving unobstructed views and preventing access to grazing livestock).


Moving down hill, we arrive at The Circus. It consisted of three curved townhouse groups, designed by John Wood the elder. He died before it's completion so his son John Wood the younger finished the work in 1768 (work began in 1754.) 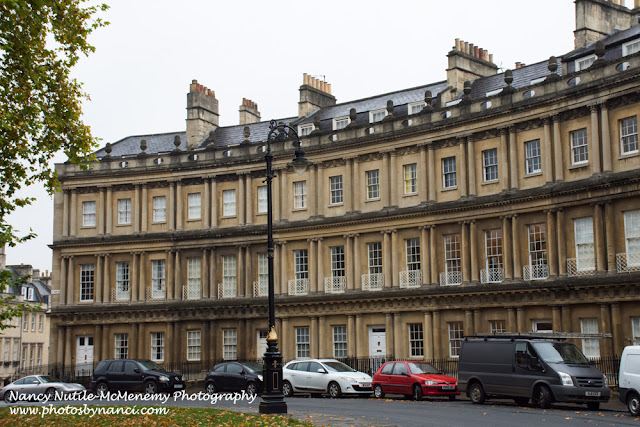 We also check out #7 The Circus, former home of Nicholas Cage. We're told he took the #7 off the door to discourage fans from visiting. 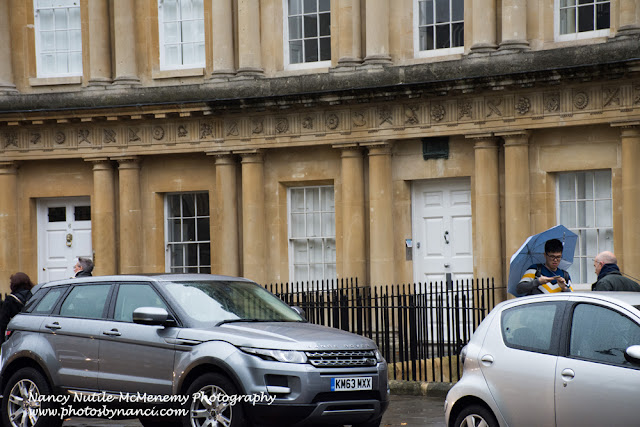 Once the home of the Earl of Chatham, it boasts an indoor swimming pool, grand staircase, five bathrooms and six bedrooms spread over five storeys.

The 9,000 sq ft pad has a 30ft kitchen, south-facing terrace and large garden and is considered the "principal house" in the 18th century Circus. Cage paid £4 million for the Georgian property above. He also own Midford Castle but he has since sold both properties.

We make our way through the market area and end up at the The Roman Baths and Bath Abbey. Mike leaves us to visit the spa and Abbey on our own. 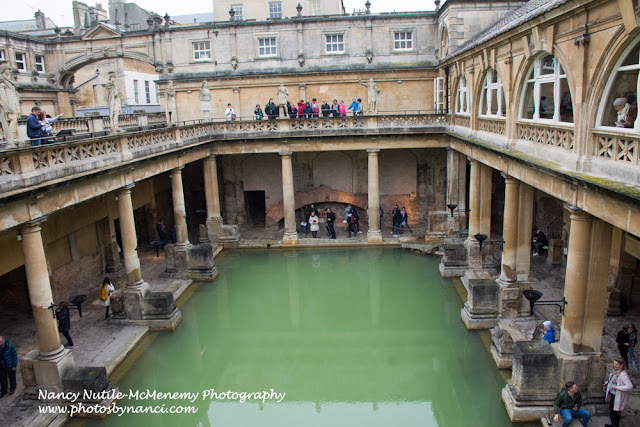 The Roman Baths, are located in the center Bath, which is designated a World Heritage Site.

It consists of the remarkably preserved remains of one of the greatest religious spas of the ancient world. The city’s unique thermal springs rise in the site and the Baths still flow with natural hot water. 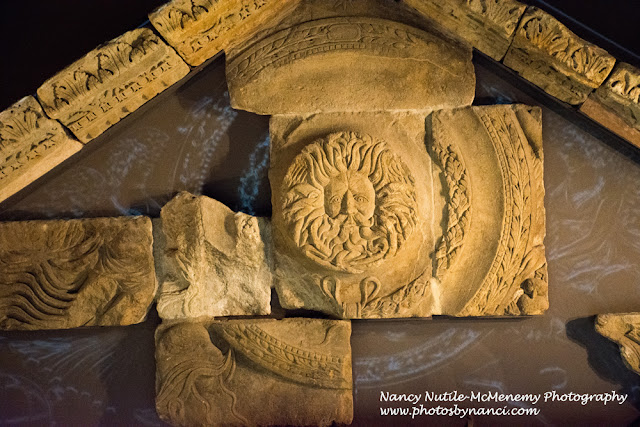 Some of the artifacts recovered from the site are phenomenal. 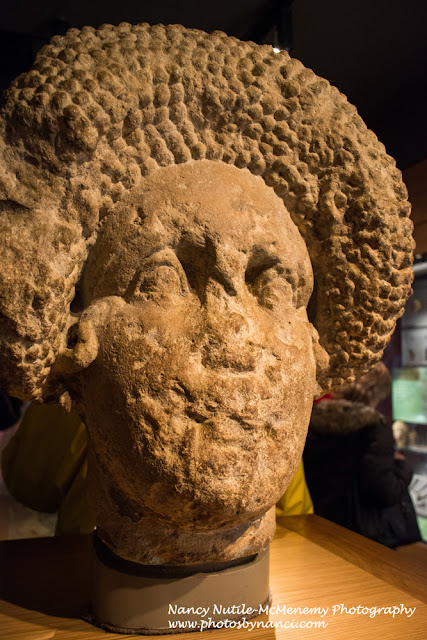 Sulis was the local goddess of the thermal springs that still feed the spa baths, which the Romans called Aquae Sulis ("the waters of Sulis"). 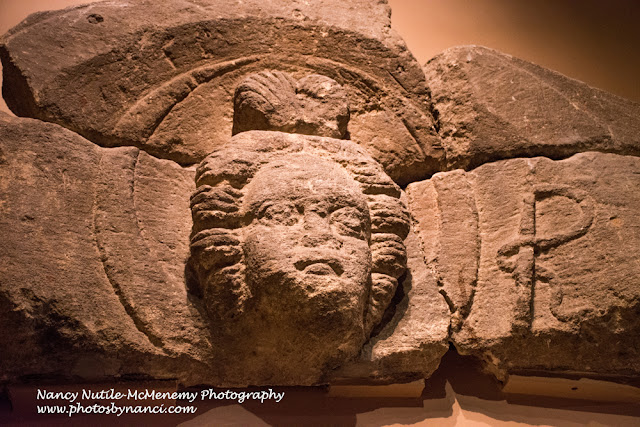 The Roman Baths attracts over one million visitors a year – making it one of the most visited heritage attractions in the United Kingdom.

We pop into the Abbey for a quick visit. 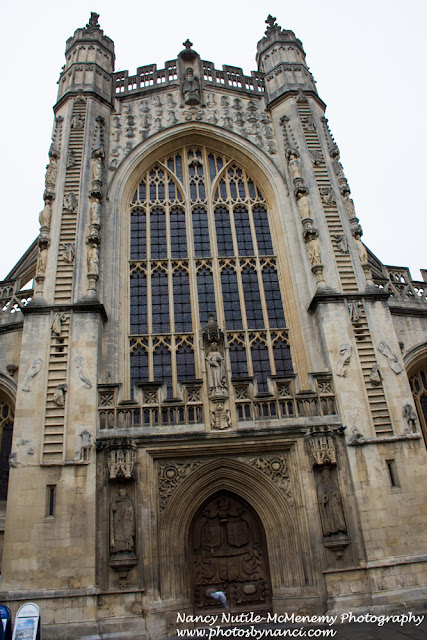 The Abbey Church of Saint Peter and Saint Paul, Bath, commonly known as Bath Abbey, is an Anglican parish church and a former Benedictine monastery. Founded in the 7th century, Bath Abbey was reorganized in the 10th century and rebuilt in the 12th and 16th centuries; major restoration work was carried out by Sir George Gilbert Scott in the 1860s. It is one of the largest examples of Perpendicular Gothic architecture in the West Country. The church is cruciform in plan, and can seat 1200. The ceiling is particularly interesting. 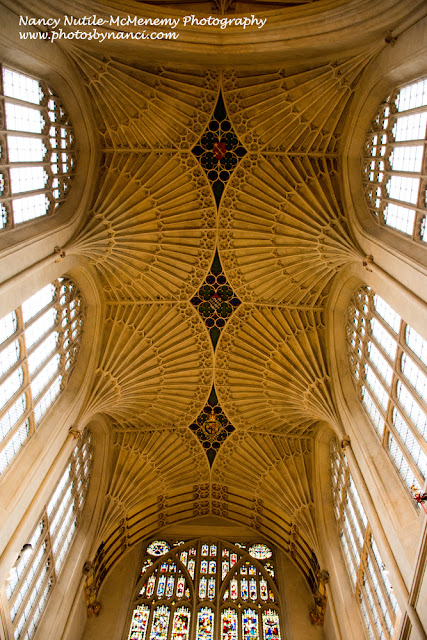 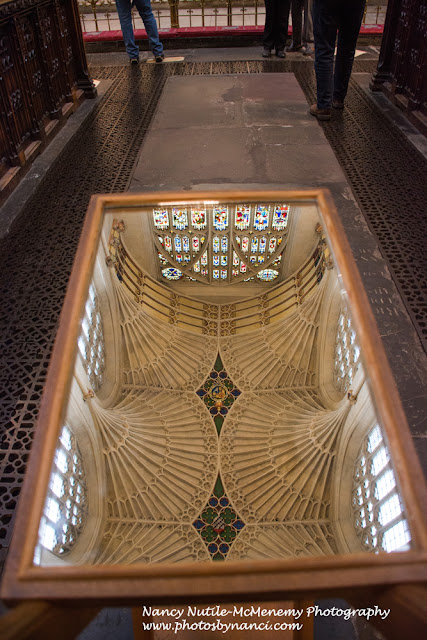 Our Go Ahead guide, Nick, said we need to see Pulteney Bridge. 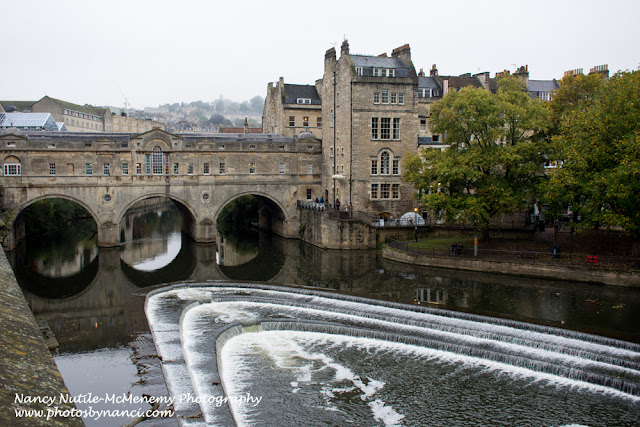 Pulteney Bridge crosses the River Avon. It was completed by 1774, and connected the city with the newly built Georgian town of Bathwick. Designed by Robert Adam in a Palladian style, it is exceptional in having shops built across its full span on both sides. Over the years the bridge was damaged due to flood and it's design was altered. The bridge is now 45 metres (148 ft) long and 18 metres (58 ft) wide.

After getting a little lost, we finally make our back to our hotel area. We stop for lunch at King of Wessex. The food and beer are really good but the service SUCKED. The locals said it's the worst of Wetherspoons pubs. I had the lamb moussaka and a pint of the Choco Mocco Porter.

Tomorrow we visit Stonehenge and Salisbury before landing in London for the remainder of our visit. 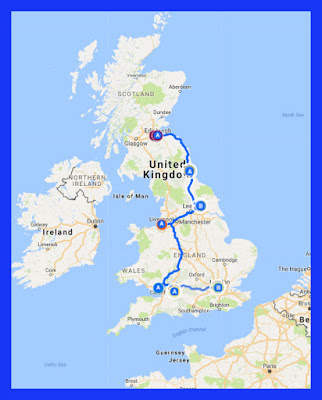